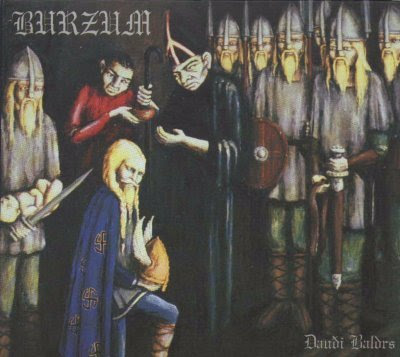 War
Between Races
A Goal Is Reached

On 'Filosofem ' the fifth Burzum release, there are deliciously insidious sound effects plus another epic keyboard piece. Describe the atmosphere you are frying to evoke on this album. Do you think it will attract listeners outside the black metal genre?

What effects? I do not remember using any effects on the album apart from using a headset microphone for the vocals [note  adds to the suggestion that the Filosofem guitar effect was added later by Pytten, but then why does 'Once Emperor have that effect?  Rainer]. Well I have no interests in saying anything at all about the album as anybody interested may listen for themselves whenever the album may be out. The 'traditional black metal genre'? If you think twice you might remember that Burzum has never been promoted as 'black metal' by my label. I usually do not care who listens to my music, but I would prefer that nobody from the 'black metal' scene listens to Burzum, as the 'black metallers' tend to be a bunch of puberal losers with a strong feeling for inferiority. I dislike vehemently such low life. Burzum is not for weak losers with dyed black hair. Burzum ist nur fur Arier! I do not know about Europe, but in Scandinavia and on Iceland mostly so-called normal people listen to Burzum. And of course, unfortunately the black metal losers listen to it as well.

What, at this point, is your message to mankind?